The wedding of Prince Joachim of Denmark and Marie Cavallier took place on 24 May 2008 in Møgeltønder Church near Schackenborg Manor. The wedding date marked the 73rd anniversary of the wedding of Joachim's grandparents, King Frederick IX and Ingrid of Sweden.

On 3 October 2007, the Danish court announced that Prince Joachim of Denmark, the younger son of Margrethe II and Henrik, Prince Consort of Denmark, was engaged to marry Marie Cavallier.

Prince Joachim and Princess Marie met while Joachim was still married to his first wife, Countess Alexandra. They were invited to a dinner and, being the only two French-speaking people invited, their host introduced them. Their romance, however, started much later.[1]

Prince Joachim divorced Countess Alexandra in 2004. Joachim and Marie started dating in 2005, and they were spotted a lot during their holidays in France. Her first official appearance with the Royal Family was at the summer photo shoot in 2007.[1]

The wedding took place on Saturday 24 May 2008 at 17.00 (Local Time), in Møgeltønder Church. The ceremony was performed by Bishop Erik Norman Svendsen.[1] The bride walked down the aisle on the arm of her father, Alain Cavallier, while the groom came with his two young sons, Prince Nikolai and Prince Felix.[2]

A wedding banquet was held at the couple's home, Schackenborg Castle.

Along the aisle, the pews are decorated with bouquets resembling bellpulls, made up of roses, white full-blown lilies and greenery. They are draped with a white bow-shaped ribbon at the top, ending in a small golden ball. The bouquets on the pews reach towards the floor and frame the doors of the pews. The flower chains at the windows are made up of roses and greenery ending in white bow-shaped ribbons.[4]

Both sides of the altar are adorned with flower pedestals containing white belladonna/larkspurs, large white roses, white lilies, and fragrant cream-coloured roses on a delicate base of vernal green plumoses, whitish green virburnum twigs and winter barley from the fields of Schackenborg.[4]

According to the South Jutland wedding traditions of Møgeltønder Church, the bride and the bridegroom sit in the middle of tightly bound roses in the shape of a heart, placed on the floor. The heart of roses rests on a green/vernal green base.[4]

Marie's wedding gown was designed by Spanish-Italian fashion house Arasa Morelli, and was sewn by a Danish woman working for the company. The dress was off-white dress made of 19th century-inspired French lace with flower patterns[5] and was lined with ivory silk faille from the silk fabric maker, Buche, in the Loire Valley.[6]

The bodice of the bridal gown consists of finely embroidered lace. The gown ends in a train that is three metres long. The bridal veil is of tulle with lace bordering and is kept in place by a tiara. The tiara was a loan from Queen Margrethe and is the tiara she wears the most. It was a gift from the Queen’s parents, King Frederick and Queen Ingrid. Originally, the tiara belonged to Princess Dagmar (1890-1961), the youngest daughter of Frederik VIII and Queen Louise.[6]

In addition, Marie Cavallier wore a pair of diamond earrings from Genève.[6]

White French lilies/longiflorum flowers have been cautiously taken apart and carefully sown together again into smaller heads of lilies. The bridal bouquet is filled with small delicate cream-coloured roses and pistachio-coloured greenery. The bottom of the bouquet is covered with green Camellia leaves from Munch & Levison’s more than 100-year-old Camellia tree.

Prince Joachim was dressed in the gala uniform of the infantry. He also wore the following Danish decorations:[8] 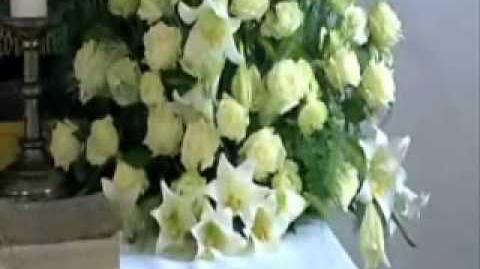 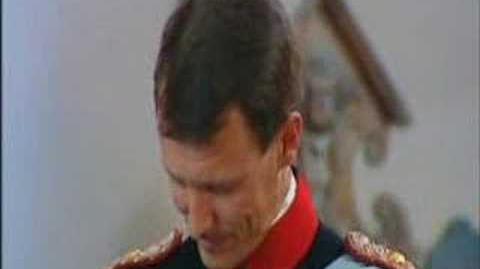 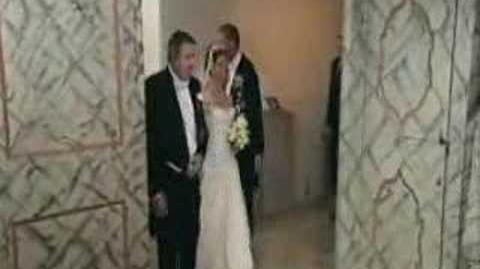 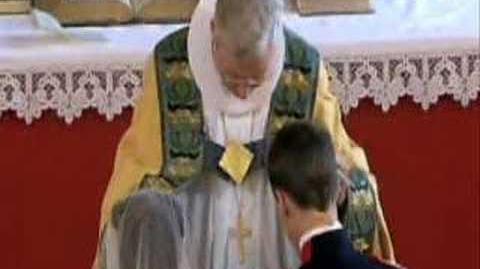 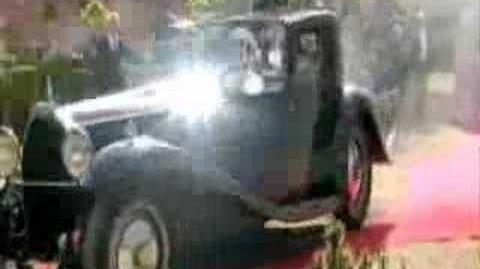 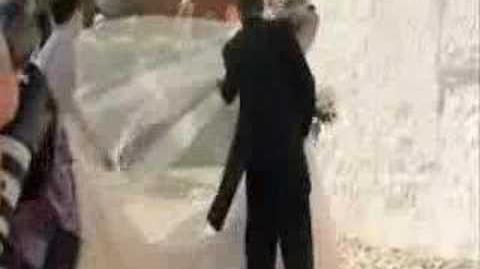 Retrieved from "https://royalty.fandom.com/wiki/Wedding_of_Prince_Joachim_of_Denmark_and_Marie_Cavallier?oldid=22323"
Community content is available under CC-BY-SA unless otherwise noted.