Margrethe II (Margrethe Alexandrine Þórhildur Ingrid, sometimes anglicized as Margaret II; born 16 April 1940) is the queen regnant of the Kingdom of Denmark. In 1972 she became the first female monarch of Denmark since Margaret I, ruler of the Scandinavian countries in 1375-1412 during the Kalmar Union.

Princess Margrethe was born on 16 April 1940 at Amalienborg Palace in Copenhagen. Her parents were the future Frederik IX and Ingrid of Sweden, then Crown Prince and Crown Princess of Denmark.

Since her paternal grandfather, the then-reigning King Christian X, was also the King of Iceland at the time, and Margrethe until 1944 was an Icelandic princess, the Princess was as a tribute to the people of Iceland given an Icelandic name, Þórhildur, consisting of "Thor" and the word for "battle" or "fight". The name is spelled with the thorn letter, which is a surviving rune, and is equivalent to "th". It is sometimes anglicized as Thorhildur.

In mid-1960, together with the Princesses of Sweden and Norway, she traveled to the United States, which included a visit to Los Angeles, California, and to the Paramount Studios, where they were met by several celebrities, including Dean Martin, Jerry Lewis and Elvis Presley.

She studied prehistoric archaeology at Girton College, Cambridge during 1960–61, political science at Aarhus University between 1961–1962, at the Sorbonne in 1963, and at the London School of Economics in 1965, and is a Fellow of the Society of Antiquaries of London.

Queen Margrethe is fluent in her native tongue, Danish; the native tongue of her husband, French; as well as English, Swedish and German.

The official residences of the Queen and the Prince Consort are Amalienborg Palace and Fredensborg Palace in Copenhagen. Their summer residence is Gravenstein Castle near Sønderborg, the dower of the Queen's mother, Ingrid, who died in 2000.

On 10 June 1967, Princess Margrethe of Denmark married a French diplomat, Count Henri de Laborde de Monpezat, at the Naval Church of Copenhagen. Laborde de Monpezat received the style and title of "His Royal Highness Prince Henrik of Denmark" because of his new position as the spouse of the Heiress Presumptive to the Danish throne.

The Queen and The Prince Consort have two children:

She is also a costume designer and designs some of her own clothes.

Margrethe is a chain smoker, and she is famous for her tobacco habit. However, on 23 November 2006 the Danish newspaper B.T. reported an announcement from the Royal Court stating that the queen would never again be seen smoking in public. Still, the queen does continue to smoke but in the future she will do so only privately. The announcement is probably due to the fact that the Danish parliament recently has decided on strict rules concerning smoking.

She suffers from arthritis and has had both her knees replaced as a result.

At the time of her birth, only males could ascend the throne of Denmark, owing to the changes in succession laws enacted in the 1850s when the Glücksburg branch was chosen to succeed. As she had no brothers, it was assumed that her uncle Prince Knud would one day assume the throne.

The process of changing the constitution started in 1947, not long after her father ascended the throne as Frederick IX and it became clear that Queen Ingrid would have no more children. The popularity of Frederik and his daughters and the more prominent role of women in Danish life started the complicated process of altering the constitution. That proposal had to be passed by two Parliaments in succession and then by a referendum, which was held on 27 March 1953. The new Act of Succession permitted female succession to the throne of Denmark, according to male-preference primogeniture, where a female can ascend to the throne only if she does not have a brother. Princess Margrethe therefore became the Heiress Presumptive.

On her eighteenth birthday, 16 April 1958, the Heiress Presumptive was given a seat in the Council of State, and the Princess subsequently chaired the meetings of the Council in the absence of the King.

Her father King Frederik IX died on 14 January 1972. On the occasion of her accession to the throne, Queen Margrethe II became the first female Danish Sovereign under the new Act of Succession. She was proclaimed Queen from the balcony of Christiansborg Palace Square by Prime Minister Jens Otto Krag on 15 January 1972. The Queen chose the motto: God's help, the love of The People, Denmark's strength.

In 2008 the Queen announced that her male-line descendants would bear the additional title of Count of Monpezat, which they inherit from the Queen's husband and consort, Henri-Marie-Jean André Count de Laborde de Monpezat.

After an election where the incumbent Prime Minister does not have a majority behind him, a “Dronningerunde” (Queen's meeting) between the chairmen of each of the Danish political parties attends a meeting with the monarch.

Each party has the choice of selecting a Royal Investigator to lead these negotiations or alternatively, give the incumbent Prime Minister the mandate to continue his government as is.

In theory each party could choose its own leader as Royal Investigator, the globalistic party Det Radikale Venstre did so in 2006, but often only one Royal Investigator is chosen plus the Prime Minister, before each election.

The leader who, at that meeting succeeds in securing a majority of the seats in the Folketing, is by royal decree charged with the task of forming a new government. (It has never happened in more modern history that any party has held a majority on its own.)

Once the government has been formed, it is formally appointed by the Queen. Officially, it is the Queen who is the head of government, and she therefore presides over the Council of State, where the acts of legislation which have been passed by the parliament are signed into law. In practice, however, nearly all of the Queen's formal powers are exercised by the Council of State, and she is required by convention to act on its advice.

The Queen's main tasks are to represent the Kingdom abroad and to be a unifying figurehead at home. The queen performs the latter task by accepting invitations to open exhibitions, attending anniversaries, inaugurating bridges, etc. As an unelected public official, the Queen takes no part in party politics and does not express any political opinions. Although she has the right to vote, she opts not to do so to avoid even the appearance of partisanship.

In addition to her roles in her own country, the queen is also the Colonel-in-Chief of the Princess of Wales's Royal Regiment (Queen's and Royal Hampshires), an infantry regiment of the British Army, following a tradition in her family. 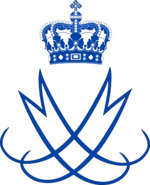 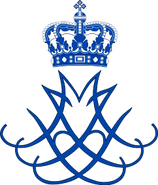 Dual Monogram of Margrethe II and husband Henrik, Prince Consort of Denmark
Add a photo to this gallery

Retrieved from "https://royalty.fandom.com/wiki/Margrethe_II_of_Denmark?oldid=23810"
Community content is available under CC-BY-SA unless otherwise noted.